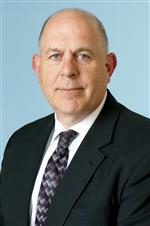 On July 1, the District officially welcomed John O'Keefe as the new assistant superintendent for business. Mr. O'Keefe fills a vacancy following the retirement of John Powell, who had served in the role for 16 years.

Mr. O’Keefe comes to Great Neck from the Sachem Central School District, where he served as Deputy Superintendent. His job responsibilities in Sachem included all aspects of budgeting and business operations, as well as overseeing transportation, food services, facilities, and instructional technology.

“I am honored to be joining this outstanding educational community,” says Mr. O’Keefe. "It is truly humbling, and I certainly appreciate the trust that has been placed in me.”

Mr. O'Keefe is the recipient of the 2022 Gregory E. Carlson Outstanding School Business Official of the Year Award, presented by the New York State Association of School Business Officials (NYASBO). This award recognizes a school business official that has demonstrated excellence in the performance of their duties and responsibilities to their school district and community. Previously, Mr. O'Keefe was awarded the School District Business Leader Award by the same organization in 2013.

Mr. O’Keefe was appointed by the Great Neck Board of Education at the April 26 Board meeting, following an extensive selection process that included multiple rounds of interviews with a selection committee comprised of parents, faculty, staff, and administrators. “Our District prides itself on our intensive hiring practices, which ensure that only the most qualified candidates are selected to uphold our District’s tradition of excellence,” explained Dr. Teresa Prendergast, Superintendent of Schools.

“On behalf of the entire District, I’d like to express my sincere appreciation and gratitude for Mr. Powell’s many years of dedicated service to our school community, during which time our District has maintained a strong financial position and earned the highest ratings from Moody’s Investors Service,” praised Dr. Prendergast during her remarks at the April 26 Board meeting. “I am confident that Mr. O’Keefe will carry on Great Neck’s long-standing reputation for sound business operations.”