The event included two days of competition. On April 28, the South Middle team won the National Middle School Cyber Challenge, a “Jeopardy-like” question-and-answer-style Capture the Flag system. The team was awarded a trophy for their first-place finish and $500 for their school’s science research program.

The Cyber Challenge was developed through the Consortium-Enabling Cybersecurity Opportunities and Research (CECOR) organization and the Cyber Defenders program at Lawrence Livermore National Laboratory.

On April 27, teams participated in the academic portion of the National Science Bowl competition, which features a fast-paced, question-and-answer format that covers a wide range of science disciplines, including biology, chemistry, Earth science, physics, energy, and math. The South Middle team placed in the “elite eight” of this bracket-style competition, out of 48 teams from across the country.

The Department of Energy National Science Bowl (NSB), established in 1991, is one of the nation’s largest science competitions. This year, 48 middle school teams and more than 250 students competed in the national event, which features the top teams from regional tournaments held across the country. 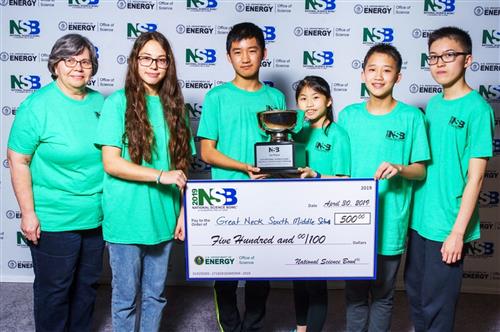