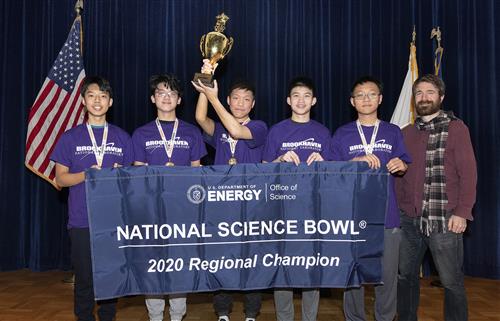 The team of Bradley He, Matthew Tsui, David Wang, Jansen Wong, and captain Anthony Zhan competed against 19 other teams at this regional event. As first-place winners, the team will advance to the National Finals in Washington, D.C. in April.

South High has consistently placed in the top three at this regional event since 2015. The team’s coach is Dr. James Truglio, biology teacher at South High.

At the Science Bowl, teams face off in a fast-paced question-and-answer format, being tested on a range of science disciplines including biology, chemistry, Earth science, physics, energy, and math.

“The National Science Bowl continues to be one of the premier academic competitions across the country, preparing America’s next-generation for future success in the ever-expanding fields of science, technology, and engineering,” said U.S. Secretary of Energy Dan Brouillette.

The Long Island Regional High School Science Bowl is one of 112 regional competitions that feed into the U.S. Department of Energy’s National Science Bowl (NSB). More than 305,000 students have participated in NSB in its 29-year history, and it is one of the nation’s largest science competitions.