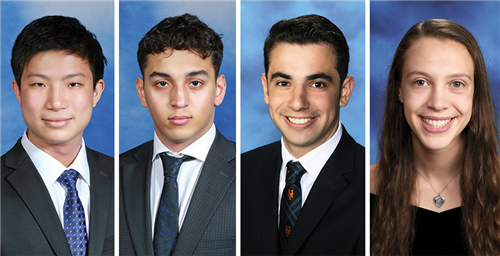 The Class of 2020 valedictorians and salutatorians for John L. Miller-Great Neck North High School and William A. Shine-Great Neck South High School were featured previously. Other significant graduation awards include the annual Barstow, Gleitsman, and Scott Moss Awards. A look at these awards, and their recipients, follows.

North High School’s valedictorian and salutatorian are traditionally their school’s Barstow Award winners. They are Valedictorian Raymond Lin and Salutatorian Judah Nouriyelian; both were featured previously.

Daniel Goldberg was a two-sport varsity athlete as a member of the wrestling and baseball teams. He was also a member of the Mock Trial team, DECA, and he served as a volunteer firefighter. Daniel will attend Cornell University.

Joanna Vissichelli was a three-sport varsity athlete as a member of the girls volleyball, basketball, and softball teams. She was named Captain of the softball team for her junior and senior years. She served as president of the Varsity Club, and she was a member of the Midnight Run Club. Joanna’s college choice is undecided.

The late Alan Gleitsman, a 1947 graduate of then Great Neck High School, established the Alan L. Gleitsman Outstanding Graduate Award in 1988 to be given annually to a North High School graduating senior. Gleitsman winners must place within the top 10 percent of their graduating class, uphold a high level of quality involvement in student activities, be dedicated to the school and the well-being of fellow students, and have a commitment to pursue further education on the college level. The recipient of the Alan L. Gleitsman Outstanding Graduate Award, given at North High School, is Raymond Lin.

The Scott Moss Award was established in 1977, in memory of Scott, who was an outstanding South High student until his death from cancer. The Award is given annually to a South High graduating senior who exemplifies the “service, concern, interest, and ability of Scott Moss.” The recipient of the Scott D. Moss Memorial Award, given at South High School, is Daniel Goldberg.