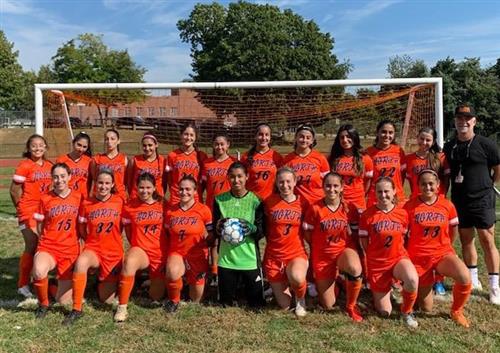 “Our soccer season can be best categorized as the perfect blend of nine amazing seniors of incredible caliber mixed with a strong group of hungry younger girls,” says Erik Connolly, team coach and physical education teacher at North High.

According to Coach Connolly, the team’s chemistry was evident from their very first game of the season, which ended in a 3-1 win over Sewanhaka. “Each night our girls came focused with a desire that was undeniable. Goal after goal, victory after victory, we kept getting stronger and more confident.”

The team continued to demonstrate a high level of determination and grit throughout the season, including two games against Roslyn that ended in a tie.

After the Blazers won their final game of the regular season against Elmont, the team anxiously awaited the outcome of a match between Roosevelt and Roslyn —  as Roslyn also maintained an undefeated record throughout the regular season. When that matchup ended in a tie, North High had sole possession of first place and the conference title.

On Oct. 20, the North High Girls Soccer team fought a well-deserved postseason battle against Bellmore JFK. Though the Blazers lost the playoff match, Coach Connolly said it in no way tarnished the team’s amazing undefeated season. “The girls were so ecstatic to be in the playoffs that after the game it was a love fest with many tears — myself included — and tons of admiration, deservedly for the seniors.”