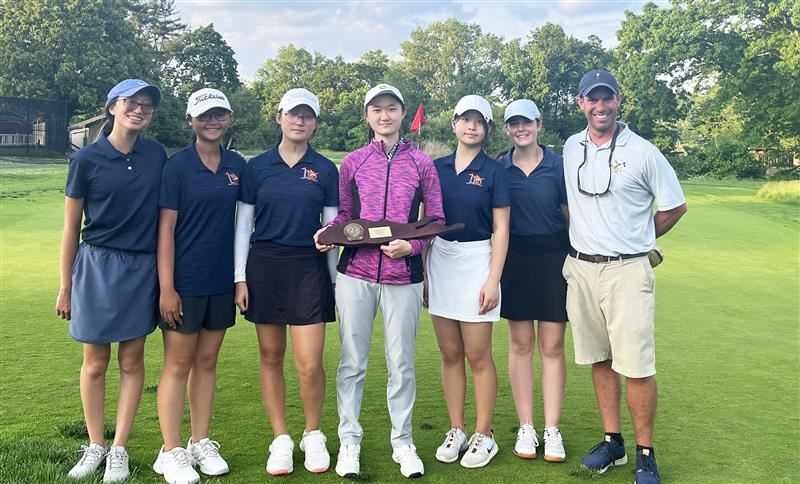 The team captured their third-consecutive Nassau County championship title at the tournament at Bethpage State Park on May 23–24. The team shot a two-day total of 836, with a 125-stroke lead over the second-place team from Garden City. In addition to the team’s overall performance, eighth-grader Lia Huang from North Middle placed first among individual golfers and earned Great Neck’s first-ever individual golf championship title. Eighth-grader Caylin Wong from South Middle also reached the podium with a third-place finish.

The team was excited for the opportunity to compete in regional and state tournaments, which had been canceled in recent years due to the pandemic. The team advanced to the Long Island tournament on May 31, which took place at Smithtown Landing Country Club. Great Neck took a commanding lead over the Suffolk County champions from Smithtown West High School and won the Long Island championship with a combined score of 445-513. Top scorers were Lia Huang (76), Caylin Wong (84), and South High senior Andrea Zhou (87). This is the program’s second Long Island Championship title.

The team wrapped up the season at the New York State championship tournament at McGregor Links in Saratoga on June 4-6. Great Neck golfers had a strong showing at the two-day event, which was the first State tournament since 2019 due to COVID. The Great Neck team finished in fourth place overall, missing out on the podium by only one stroke. Lia Huang led Nassau County participants and finished in a tie for fifth place among individual golfers in the State.