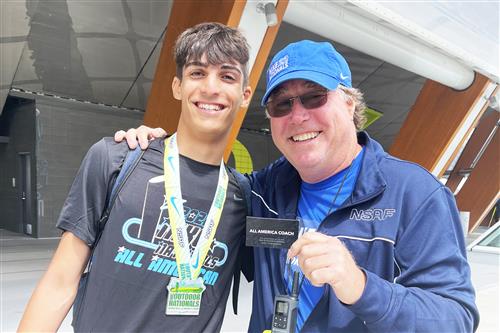 Adam Namdar, a senior at North High School, capped off his high school track and field career with a podium finish at the Nike Outdoor National Championships in Eugene, Oregon on June 18. He competed in the high jump against the best high school athletes in the country and won third place with an impressive jump of 6’7”.

Adam McKenzie, coach of the North High boys track team, first encouraged Adam Namdar to try the high jump during the 2021 spring season. Adam was already a member of North High’s track and field team who competed in running events, but he had never competed in the high jump.

Adam immediately found success in his new event. In his very first season competing in the high jump, he won the Division Championship, third place at the Nassau County Championships, and second place at the Long Island Meet of Champions with a jump of 6’4”. Adam earned All-Division, All-County, and All Long Island Honors in the spring of 2021. There was no State Meet in 2021 due to the pandemic.

Adam returned to the high jump during the 2022 winter season. He won the Conference Championship and County Championship titles, and he finished in second place at the State Meet with a jump of 6’5” – setting a new school record. Adam also qualified for the National Championships in the winter season and placed seventh in the competition. He earned All-Conference, All-County, All-State, and All-Long Island Honors.

This spring, in his final season as a high school athlete, Adam defended his County Championship title with a jump of 6’6”. He again placed second at the New York State Championships and advanced to the National Championships. This time, Adam cleared 6’7”, earning third place and a spot on the podium at the Nike Outdoor National championships at the famous Hayward Field at the University of Oregon. His final season was the best of his career, earning All-Conference, All-County, All-Long Island, All-State, and All-American Honors.

“Watching Adam compete, placing third and becoming an All American in the high jump at Hayward Field, is one of the top highlights of my coaching career,” says Coach McKenzie, a North High graduate himself (’81) and former school record holder in the high jump event. “I am very proud of him and to have coached him to a new school record in an event that I once held in the same event at North.”