The John L. Miller-Great Neck North High School presents two prestigious awards at its graduation ceremony—the Alan L. Gleitsman Outstanding Graduate Award and the Genelle Taney Memorial Award. (The school’s other awards are given at the school’s Senior Awards Event prior to commencement). 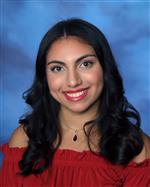 The late Alan Gleitsman, a 1947 graduate of then Great Neck High School, established the Alan L. Gleitsman Outstanding Graduate Award in 1988 to be given annually to a North High School graduating senior. Gleitsman winners must place within the top 10 percent of their graduating class, uphold a high level of quality involvement in student activities, be dedicated to the school and the well-being of fellow students, and have a commitment to pursue further education on the college level. Sahar Tartak is the winner of the 2022 Gleitsman Award. Sahar was featured in a previous news article as the North High Valedictorian.

Genelle B. Taney was a 2003 North High graduate who died at age 19, after a long and courageous battle with cancer. Genelle was the 2003 Gleitsman Award recipient and is remembered for her “unsurpassed love of knowledge, a dedication to the arts, a passion for athletics, and an endless commitment to the betterment of her school and her fellow classmates.” The Taney Award recipient should possess a combination of these qualities. The Award is based solely on merit. One quarter of the Award must be contributed by the recipient to a charity of his/her choice, subject to the approval of the Award trustees. The Award was established in Genelle’s memory in 2006. Natasha Khazzam is the winner of the 2022 Taney Award.

Natasha Khazzam was a national award winner in the NCTE Writing Competition, a regional Gold Key recipient in the Scholastic Art and Writing Awards, and a gold medalist on both the National Spanish Exam and the National French Exam. She served as editor-in-chief of the school newspaper, president of the French Club, and president of the Multicultural Club. She was also a member of the Foreign Affairs Club, a peer tutor, and a peer leader. Natasha was captain of the North High Cross Country, Winter Track, and Spring Track teams, and she earned All-Conference and All-Division athletic honors. During the pandemic, Natasha built a website to create the Virtual Coffee House, which provided a creative outlet for students and showcased original student artwork in various mediums. Natasha will attend Yale in the fall.