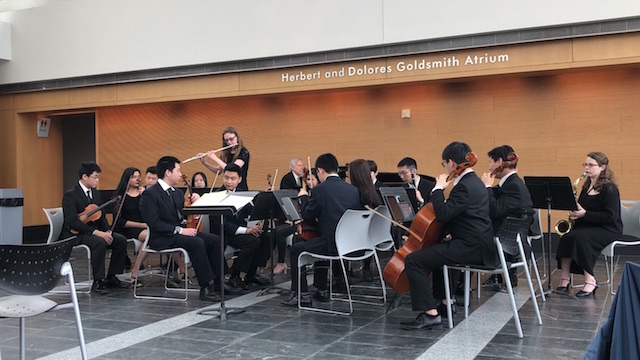 On March 3, musicians from the North High School Chamber Symphony Orchestra performed in the Goldsmith Atrium at the Tilles Center as a “warm up” act before the Czech National Symphony Orchestra’s concert in the Main Hall.

The North High instrumental music program was honored to receive an invitation from the Tilles Center for a small group of student musicians to perform at the venue. Under the direction of instrumental music teacher Joseph Rutkowski, a 16-piece ensemble from North High entertained concertgoers with music selections by Czech composers, as well as standards, jazz, rock, and Broadway favorites.

“Since it was the Czech National Symphony that we would be ‘warming up,’ the students and I decided to play the music of three Czech composers: Dvorak, Smetana, and our beloved Czech-born American friend, the late Karel Husa,” explained Mr. Rutkowski.