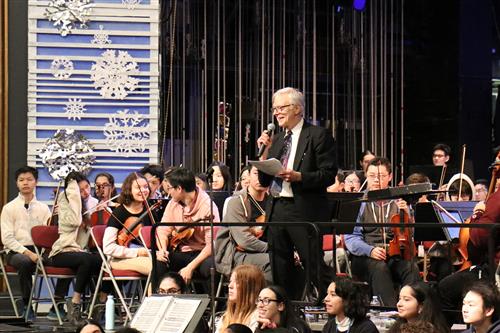 North High School presented the twenty-ninth annual Young Peoples Concert for an audience of elementary and middle school students on Dec. 17. This year’s program expanded to include vocal musicians in addition to the traditional instrumental performances, in an effort to encourage even more students to pursue their musical interests throughout their K-12 school careers.

The concert concluded with a rousing rendition of “Mambo” from West Side Story by Leonard Bernstein. This finale has become a tradition at the Young Peoples Concert, with audience members singing the refrain while their teachers perform a conga line through the auditorium.

The Young Peoples Concert was created in 1991 to inspire young musicians and increase the number of students participating in the secondary music program. The audience, once only composed of fifth graders from elementary schools that “feed into” North Middle and North High––E. M. Baker, John F. Kennedy, and Saddle Rock schools––has grown to include eighth-grade students from North Middle as well. 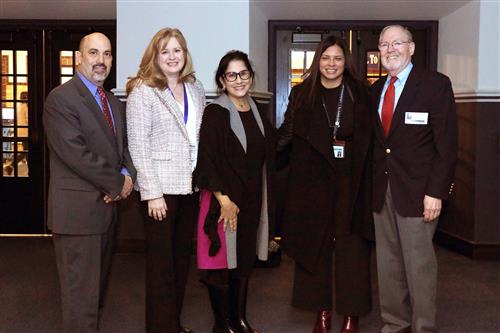 Also in attendance at this year’s performance was Dr. Victor Caliman, a retired principal from Saddle Rock School, who developed the idea for the Young Peoples Concert with Mr. Rutkowski 29 years ago. For the inaugural performance, the North High Band had 29 members and the Orchestra had 16 members; both ensembles now boast enrollments of more than 80 students each.

The North High music program is consistently recognized for excellence by regional and national organizations that support music education. In 2019, North High received the highest award of Gold with Distinction through the Long Island Music Hall of Fame High School Recognition Program. Additionally, the Great Neck Public Schools is recognized by the NAMM Foundation as one of the Best Communities for Music Education, an honor the district received for the thirteenth time in 2019.