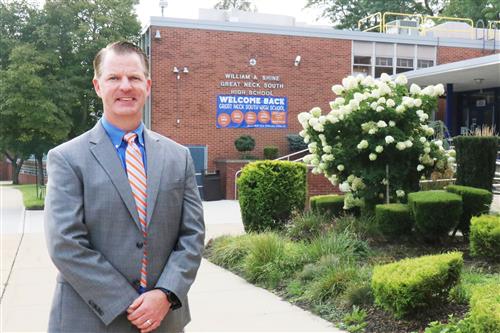 Mr. Hopkins comes to Great Neck from the West Hempstead School District, where he served as a high school assistant principal and the district’s director of guidance, music, and related arts.

Prior to becoming a school administrator in West Hempstead in 2014, Mr. Hopkins had a combined eight years of experience as a school counselor at George W. Hewlett High School in the Hewlett-Woodmere School District and H. Frank Carey High School in the Sewanhaka Central High School District. In 2011, Mr. Hopkins was a recipient of the Yale Educator of the Year award, which recognizes outstanding educators who support and inspire their students to achieve at high levels.

Mr. Hopkins says he has “great pride and excitement” as he takes on the Assistant Principal role at South High. “I am eager to work alongside the caring and talented professionals, students, and families of the Great Neck community,” says Mr. Hopkins. “I am looking forward to building lasting relationships that will continue to foster a love of teaching and learning that is evident here in South High School.”

Mr. Hopkins earned a Master of Education in school counseling and a Bachelor of Science in interdisciplinary studies from NYIT. He also holds a Certification in School Building Leadership and School District Leadership from Queens College.