Chapter 2605 (from Great Neck, Long Island) arranged for a very special
Induction Ceremony which took place over several hundred miles from our
school building. On December 1, 2003, five of our Tri-M Honor Society
members from Great Neck North High School inducted Mr. Frederick Ritter as
an honorary member of our Chapter. (See NH-TriMCert photo and NH-TriM shirts
photo.) This was done at the NYSSMA All-State Conference in Rochester. Mr.
Ritter graduated Great Neck [North] High School in 1932 and was a freshman
trumpeter in the band and orchestra in our building the first year it was
open. Mr. Ritter continued to play his trumpet while he was a student at
Cornell University. He stopped playing his trumpet for about 50 years and
then began playing it again about 10 years ago. His wife contacted the
school this past fall to donate yearbooks for our collection of historical
archives. We are proud to say that Mr. Ritter is now 89 years old and taking
private lessons on the trumpet, practicing on a regular basis.

During the intermission of our December 16, 2003 Winter Concert at Great
Neck North High School, our All-State five gathered at the front of the
stage with a gift from Mr. Ritter

Gabrielle Aiuto said: "After the formal induction ceremony in Rochester two
weeks ago, Mr. Ritter presented us with this gift. (See NH-TriMSussa photo.) It is an original cover from a composition by our fellow Long Islander, John Phillip Sousa. It was given to Mr. Ritter about 25 years ago and he said that he can't think of anyone he'd rather pass it on to but the musicians of his alma mater. He
would like us to hang it on the wall of the band/orchestra room in our
building. Sousa lived for many years in Sands Point, near where Mr. Ritter
lived in Port Washington in the 1950s and 1960s. 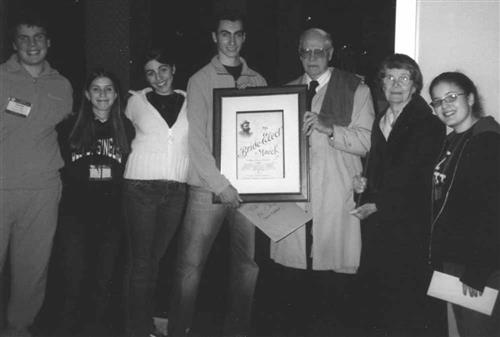 Mr. Ritter wrote us saying, "I am pleased and delighted to be inducted into
the Music Honor Society of my old high school, and I thank all of you very
much for coming up with this special idea. Sincerely, Frederick Ritter,
Class of '32.
And remember: KEEP UP YOUR MUSIC! (Meaning PRACTICE PRACTICE PRATICE!)"

In December of 2011, I spoke to Mrs. Ritter, his loving wife of 65 years and she told me to tell my students, “Fred was practicing his trumpet every day until 3 weeks before he died. He became very weak and was unable to do anything, but sleep.  At his funeral and at his request, a graduate student from the Eastman School of Music played “Prayer of Saint Gregory” by Alan Hovhaness for trumpet and organ while Fred’s trumpet was on the alter displaying how much music meant to him.” 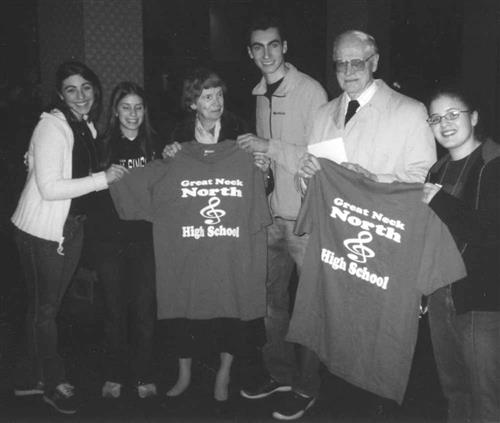